Fürth/Germany, 29 August 2017: Leonhard Kurz will be presenting novel backlit surface designs at Fakuma 2017. Using an automotive door trim as an example, Kurz will demon-strate the use of variable partial backlighting to produce mood-setting day/night designs with color changes, color gradients and changing color intensities. Besides surface finishes, multi-colored designs with a special depth effect will be presented where the three-dimensional effect is especially striking as a result of the backlighting.

New possibilities for combining holographic images with lighting functions will be illustrated with the aid of a futuristic demonstrator in which a 3D looking on/off symbol becomes visible when the backlighting is active. Thanks to this prototype from Kurz, which employs patent pending hologram technology, visitors to the trade fair will be given a glimpse into the future of holographic design effects on control elements and displays.

Most of the backlighting functions presented at the trade fair booth can be sensor driven. The necessary sensor technology is available from the Kurz subsidiary PolyIC, whose PolyTC range of highly-conductive, capacitive sensors have been incorporated into all the trade fair demonstrators. Single-touch, multi-touch as well as contactless gesture control will be shown.

At the Kurz booth A4-4122, there will also be a live demonstration of complex plastic components being chrome finished. Visitors to Fakuma will be able to see in action the latest generation of the Geba 32/SW hot stamping system from Kurz subsidiary Baier. This high-performance machine, which comes with a programmable logic controller, interactive user interface and servo control drive, will be used to chrome finish radiator grilles with demanding geometries. 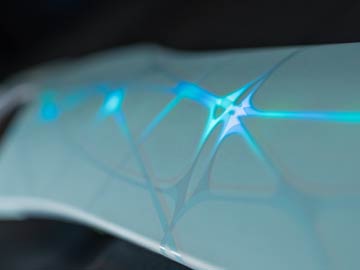